The following example is used to illustrate the way to configure the S-Frame integration model for multi-platform simulation.

The example is a two-dimensional two-story one-bay moderately ductile concrete moment-resisting frame. The structure is supported by a raft foundation founded on dense soil where the soil settlements are negligible. The seismic mass on each floor is 30 tons, equivalent to a seismic weight of 294.3 kN. The height of each floor is 3.3 meters, and the span of the frame is 5.0 meters long. The concrete compressive strength, after 28 days, is expected to be f’c = 30 MPa. The yield strength of all reinforcing bars is assumed to be fy = 400 MPa. A diaphragm constraint is assigned to the joints on each floor. A lumped-mass model is used for modeling the seismic mass of the structure on each floor. A modal response spectrum analysis is carried out on the structure, and the periods of the first and the second mode of vibration are determined as 0.436 seconds and 0.126 seconds, respectively, from a preliminary ETABS model.

The structure is decomposed into one S-Frame integration model and one VecTor2 substructure model. Specifically, linear elastic frame elements are used to model the beams and columns in S-Frame while continuum elements are used to model the concrete beam-column joint sub-assemblies on the first floor. In the VecTor2 substructure, the length of the beam is taken as one meter from the column centreline, equivalent to 800mm of clear length. The same length of the column is modeled in the substructure VecTor2 model.

Naturally, if the control joints from the S-Frame model are connected only to the center point of the membrane elements, modeled in VecTor2, the membrane elements will experience unrealistic stress concentrations. To avoid disturbed regions in the VecTor2 model, the number of interface nodes in S-Frame is increased such that it matches the mesh topology of the VecTor2 substructural module. In addition, rigid elements are created between the interface joints in the S-Frame integration model. As shown below, the rigid elements will ensure a realistic transfer of loads from the beam elements in the S-Frame model to the continuum elements in VecTor2. 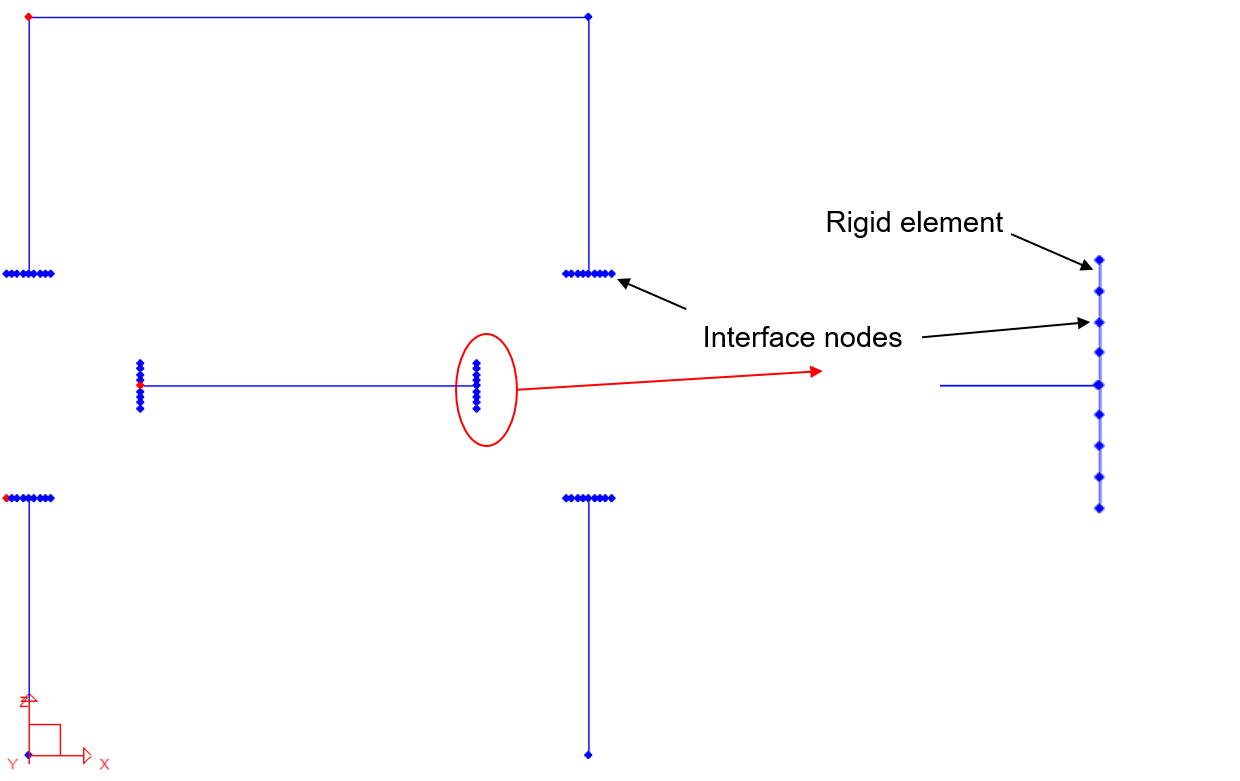 In order to link the S-FRAME integration module with the VecTor2 substructure module, a special constraint type, VecTor2 constraint should be used as shown below. 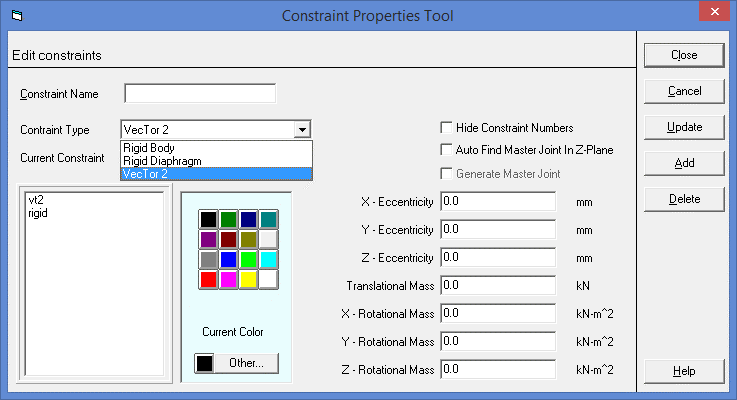 This constraint works similar to the SubStructure element developed in OpenSees to transfer data at the interface nodes. To accommodate the 2D VecTor2 model in the 3D S-FRAME model, it is also necessary to define the plane in which the VecTor2 model is located. For example, the plane for the beam-column joints represented in VecTor2 is the XZ-plane in the global coordinate system, as shown below. The User Coordinate System Tool (UCS) should be used to define a local coordinate system where the local x- and y- direction are aligned with the x'- and y'-direction in VecTor2, respectively. Finally, the defined coordinate system should be assigned to all interface nodes. 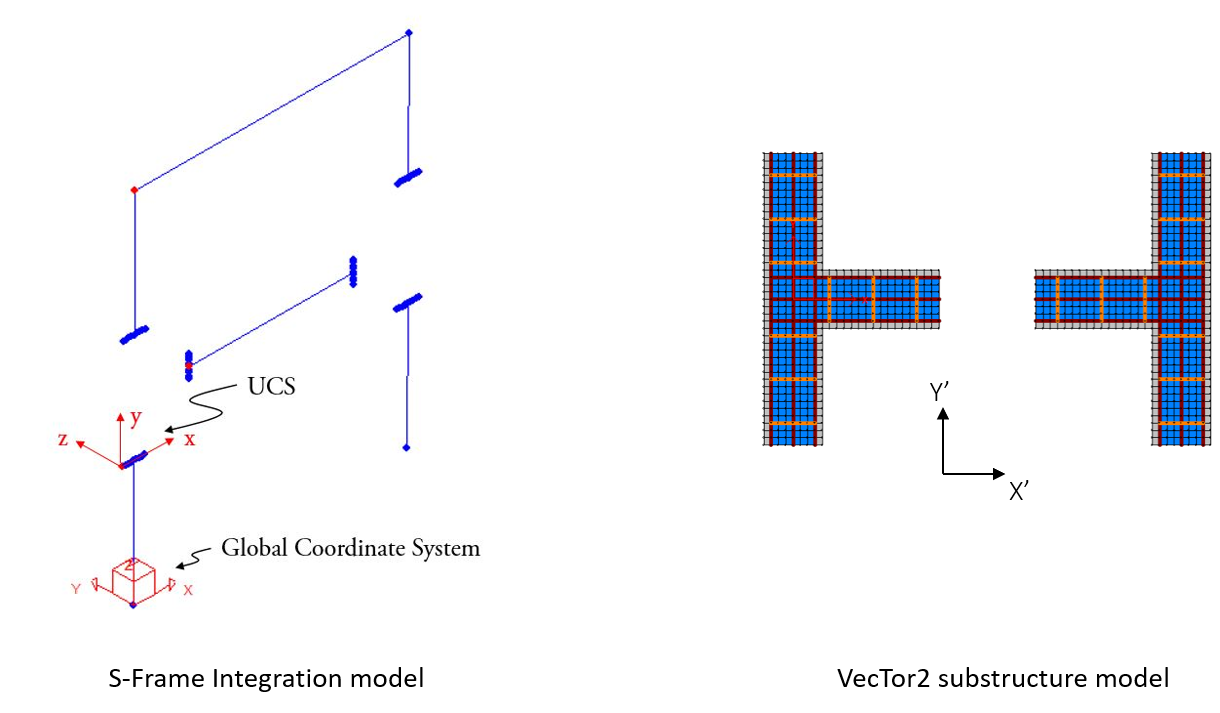 The following steps should be followed to configure the S-Frame model for the simulation example. 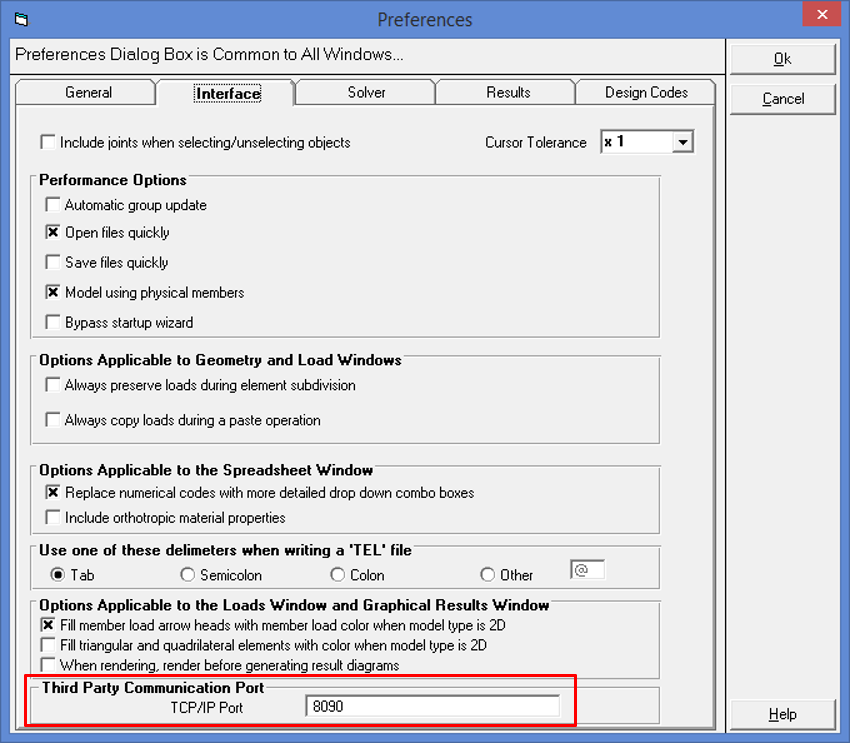 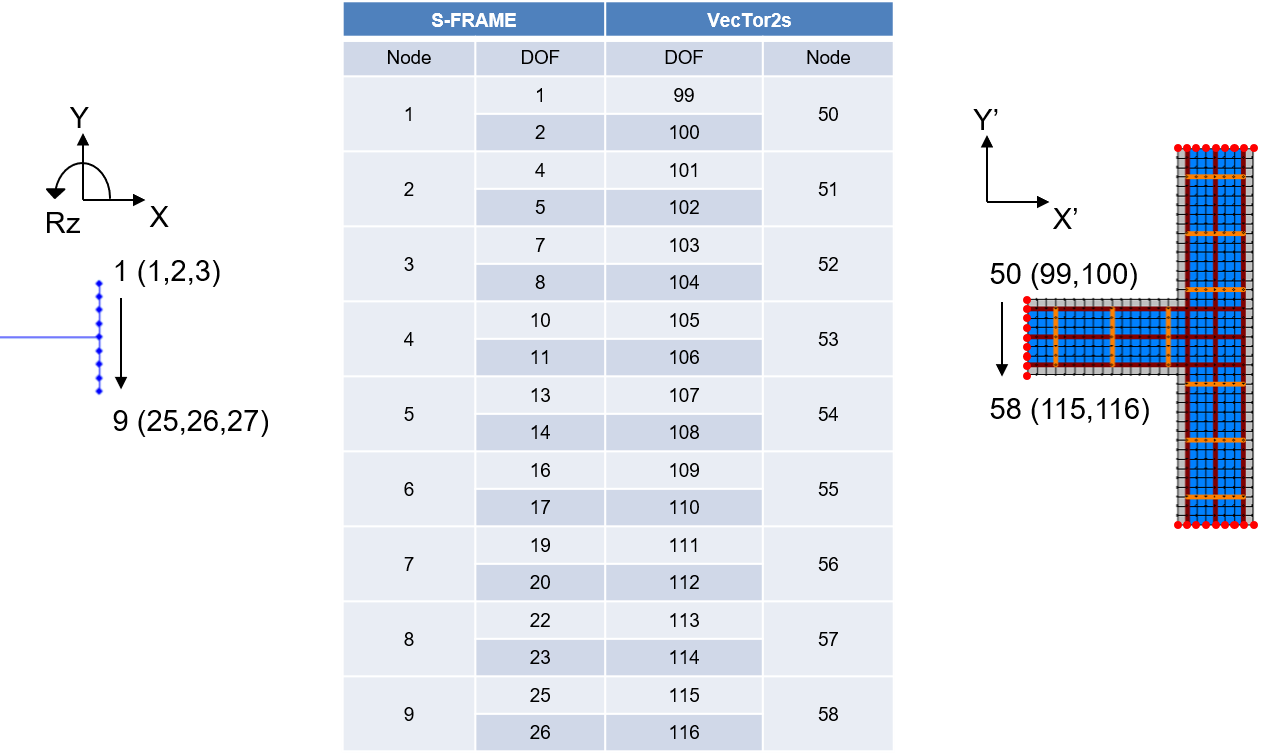 As VecTor2 substructure model can generate the initial stiffness matrix for the connected integration model, there is no need to predefine the initial stiffness for the S-Frame integration model. To specify the interface nodes and indicate the degrees of freedom for communication, a configuration file "NICON.cfg" is used in the VecTor2 model as shown below (Note that only a limited number of nodes are included in the Figure):

It should be noted that the interface nodes must be specified with the same sequence, in the integration and substructure models, and in an ascending order.

Another difference between the VecTor2 standalone and substructure models is model JOB file as shown below. To distinguish the VecTor2 model for multi-platform simulation, the model format should be specified as 3. In addition, similar to OpenSees and Abaqus substructure modules, the total number of analysis steps is unknown before the simulation due to the potential iterations in the integration model. Therefore, a large number of analysis steps (e.g. 100000 in this example) should be used in the substructure model to cover over the possible number of iterations in the integration model. 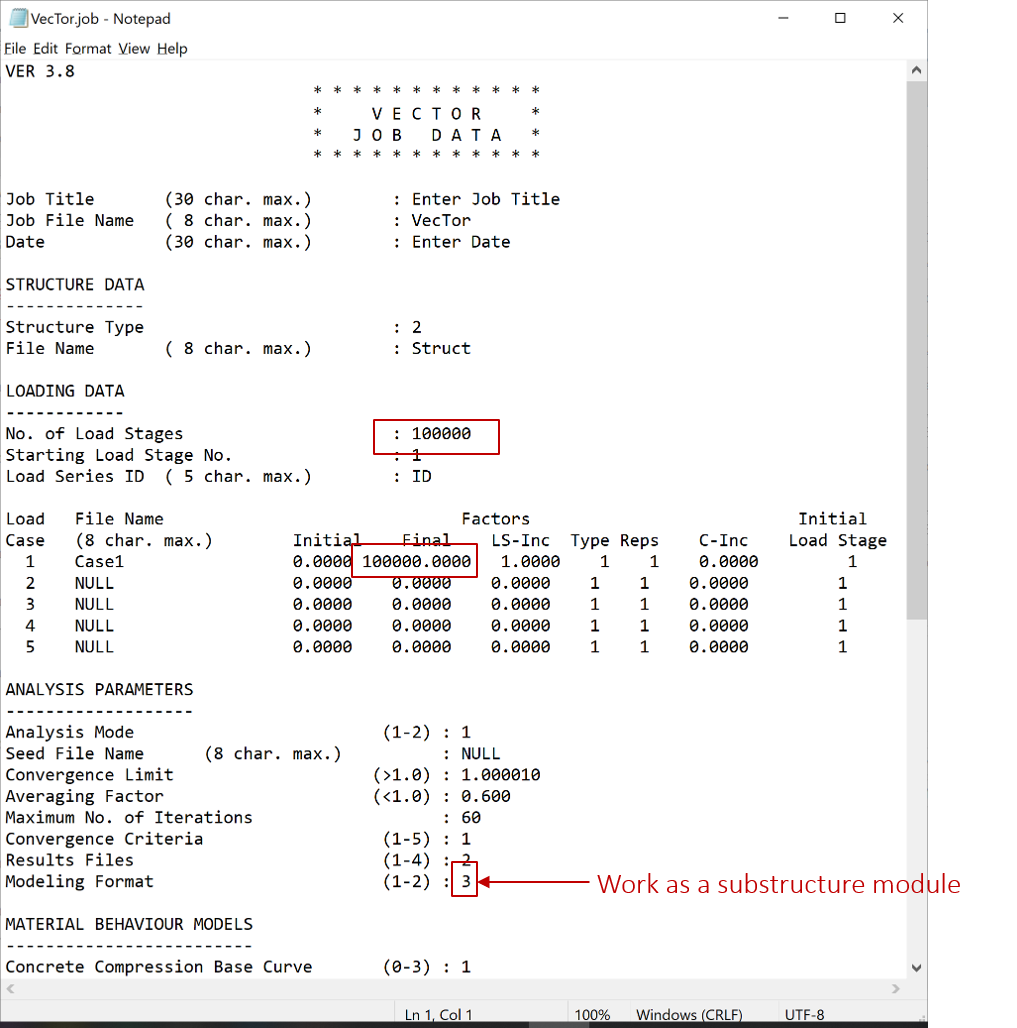 Upon completion of the above steps, the multi-platform numerical simulation can be executed using the procedure outlined below:

The performance of the beam-column joints in the VecTor2 model can conveniently be assessed in Augustus, terms of other response parameters, such as reinforcement stresses, principal stresses, principal strains, crack width, etc. The deformed shape and the crack pattern of the beam-column joint sub-assemblies as the structure is deformed under the lateral loads are shown below.

The pushover curves obtained from the standalone S-Frame model and the hybrid model, represented as the ratio of the lateral force in N, to the structural weight in kg. It can be seen that both models have the same initial responses up to a shear-weight ratio of 1.0 g. After that, significant strength degradation can be observed from the hybrid model due to the nonlinear behaviour of the beam-column joints. 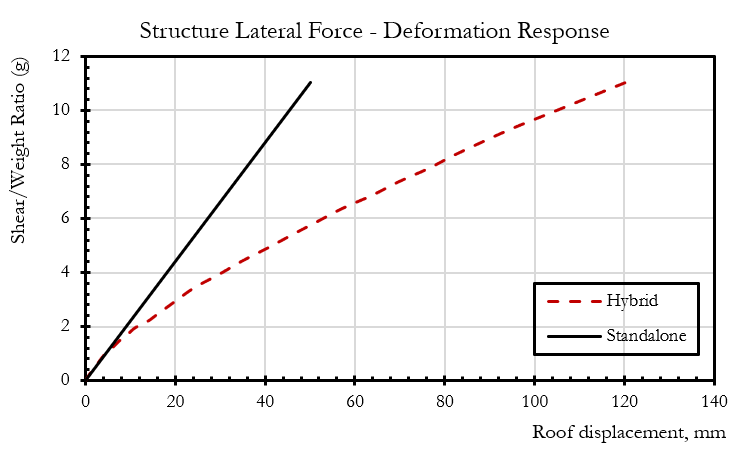 Example Download
​
The above simulation example can be downloaded from here.