The following example is used to demonstrate the configuration details of the applications, i.e., integration module, NICON-AIO(1DOF version) for hybrid simulations.

The example is a simple two degrees of freedom (DOFs) mass-spring system shown above. The system only experiences motion in the horizontal direction. The masses are free to slide horizontally. Both M1 and M2 are 20.0 kg, while K1 and K2 are 5.0 N/mm. A damping ratio of 2% is assumed for the first and the second mode of the structure. The periods of the structure are calculated as 0.643 seconds and 0.246 seconds for the first and the second modes, respectively. In order to limit the time of the experimental hybrid simulation, Arias intensity time bracketing scheme is used to obtain a portion of the M6C1 earthquake ground motion record during which 15% to 85% of the seismic input energy is accumulated. The main criteria for choosing such duration is to limit the ground motion length. The resulting ground motion, which is included in the example files (M6C1_1.txt) is 2.4 seconds long. A scaling factor of 3.0 is used for the ground motion. This factor is determined such that the displacement of the physical substructure does not exceed the actuator stroke.

The structure is decomposed into one OpenSees integration model with the two masses and the element K2 while the substructure model includes the element K1 that is represented as a spring, as shown below. 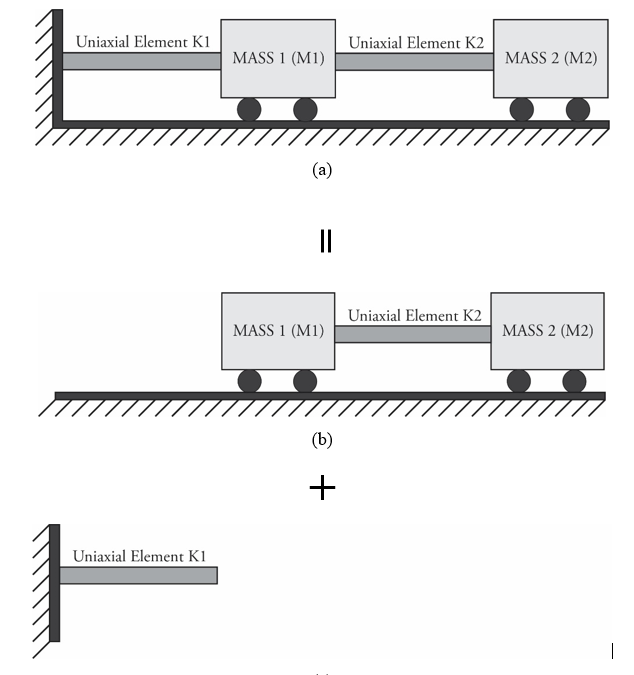 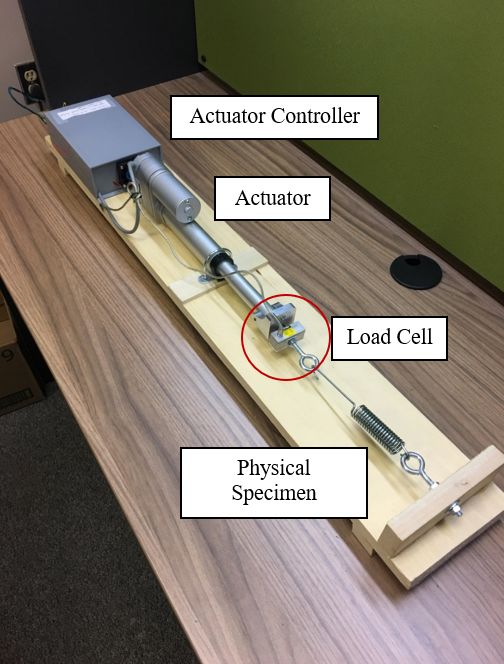 The way to configure the OpenSees integration model for this sample test can be found here.

The version of the interface program NICON that is used in the current example is developed for one-dimensional problems and is included in the example files. The NICON program is responsible for establishing communication between the OpenSees integration module and the actuator controllers, to ensure that the displacements of the interface nodes, in the numerical model and the physical specimen are synchronized. In essence, in each step, the NICON program will communicate the command displacements to the actuator controller. The actuator controller will then apply the displacement command to the actuator. The load cell will measure the force feedback of the specimen, and the actuator’s linear variable differential transformer (referred to as internal LVDT) will measure the actual actuator's stroke. Typically, an extra displacement sensor like a LVDT (referred to as external LVDT to be distinquished from the internal LVDT) is required to measure the actual deformation of the specimen as it could be different from the actuator's stroke due to the elastic deformation of the testing frame or slackness or gaps at the connections of the test setup, as shown below. 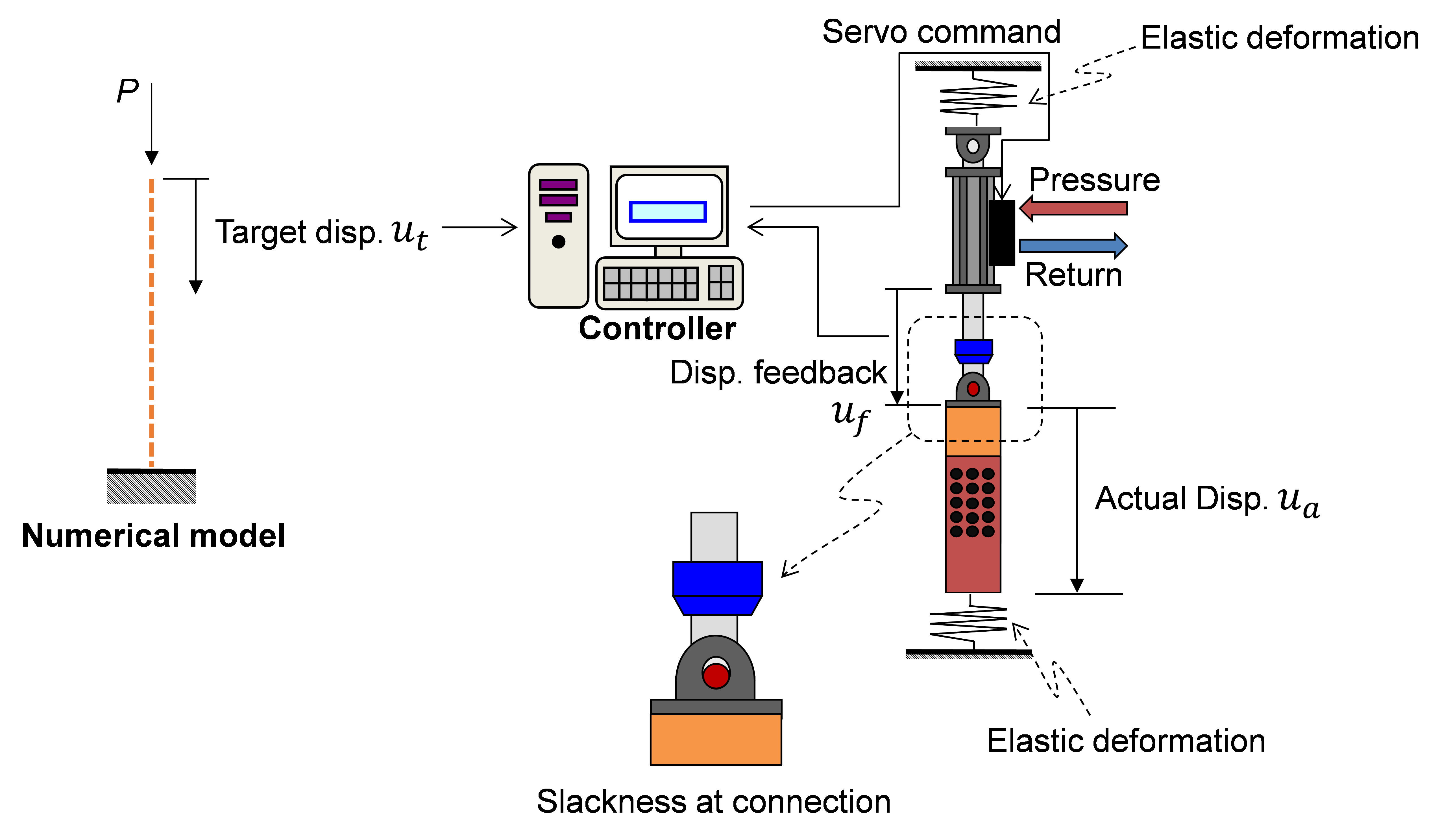 where the superscript $k$ represents the value at the $k$-th correction/iterative step; $\alpha$ is the gain factor ranging from 0 to 1 to control the correction amount. The iteration process for each analysis step stops whenever one of the following is satisfied:

More details about the error compensation scheme can be found in reference. The force and displacement feedbacks of the specimens are then communicated from the actuator controller to NICON. NICON will send the displacement and force feedback to the OpenSees integration module, and the analysis will proceed to the next step.

The National Instrument hardware is connected to the actuator controller in the test setup. The NI DAQ hardware that is used in the current example is NI USB-6218, as shown below. 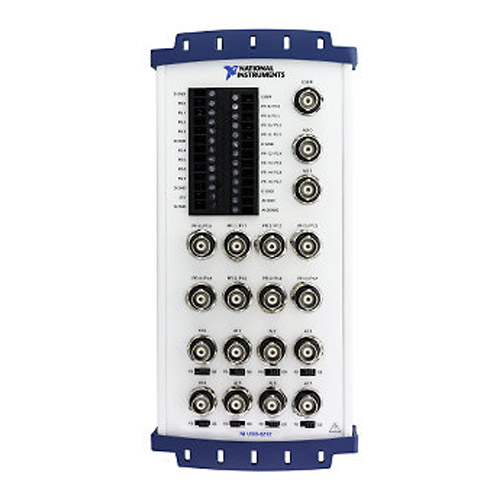 It is important to verify that the input/output channels that are used for displacement and force measurements are consistent with the designated physical channels, in NICON configuration file. The ports that are used in the experimental setup are marked as below. 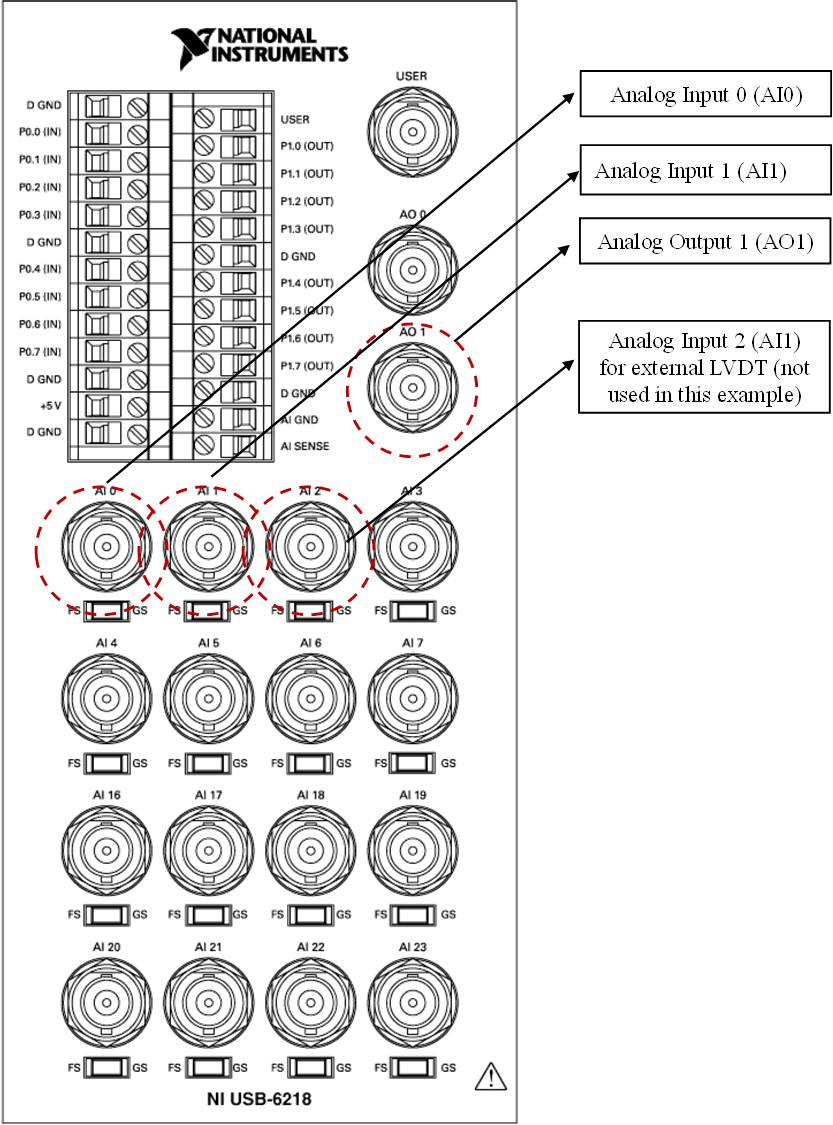 Each port and its use are discussed below:

There is a single configuration file (NICON_Config.cfg) to define the parameters requires for the functions implemented in NICON-AIO.

The key parameters in the configuration file are explained below:

The control buttons and indicators are located in different panels and each panel has one or more tabs. The functions and meanings of each button and indicator are explained in the following. The figure below shows a screenshot of the NICON front panel. 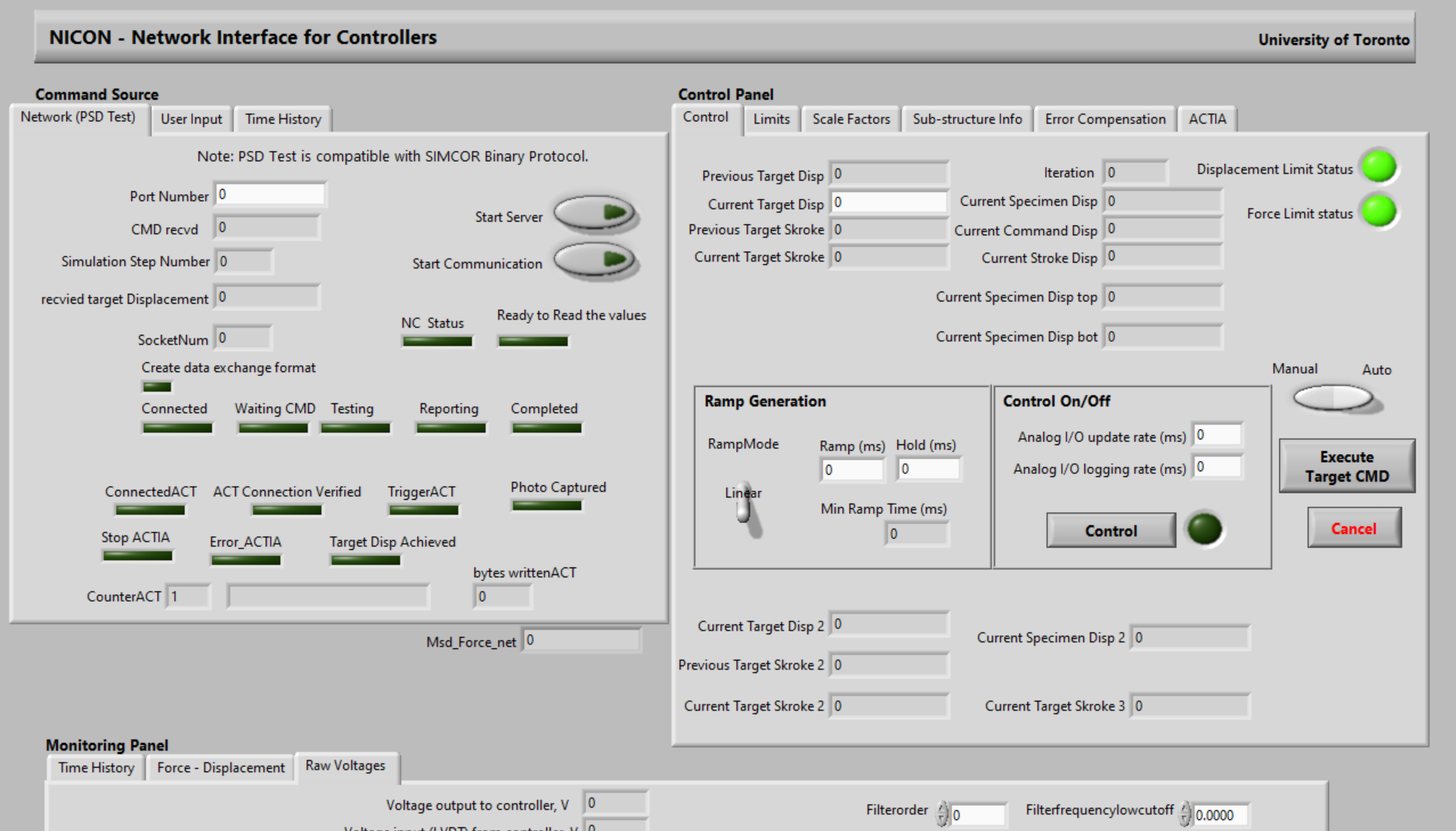 The network tab is shown below. During the hybrid simulation, this tab shows information about the OpenSees model and the communication status between the numerical model and NICON. 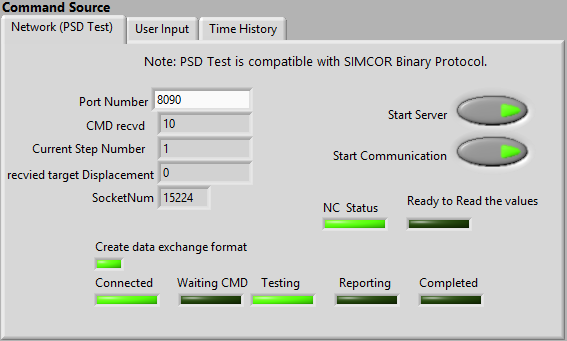 Current Step Number: This indicator shows the number of the current time-step during the test. It can be useful for monitoring the progress of the test.

SocketNum: This number is used to set up a connection between NICON and the numerical OpenSees model. It is pre-defined in the substructural module that is used in OpenSees and does not need to be changed by the user.

Connected: The ‘Connected’ light will go on when the connection is established.

Waiting CMD: This light is turned on when OpenSees is processing data. This is after NICON sends force and displacement feedback to OpenSees and before NICON receives the new displacement command from OpenSees.

Testing: This light will turn on during the time it takes for NICON to send the displacement and force measurements back to OpenSees, after receiving a displacement command.

Reporting: This light turns on when NICON sends all feedback into the communication library. It turns off very quickly.

Completed: This light turns on when the simulation is completed.

NC Status: This light turns on when a new command is received and NICON is ready for testing.

Ready to Read the Values: This light turns on when NICON is ready to receive the new displacement command, in the simulation.

This tab is used for cases when it is desired to apply manual commands to the actuator controller. In hybrid simulations using NICON, the offset functions are used before the test. A screenshot of the user input tab is shown below. 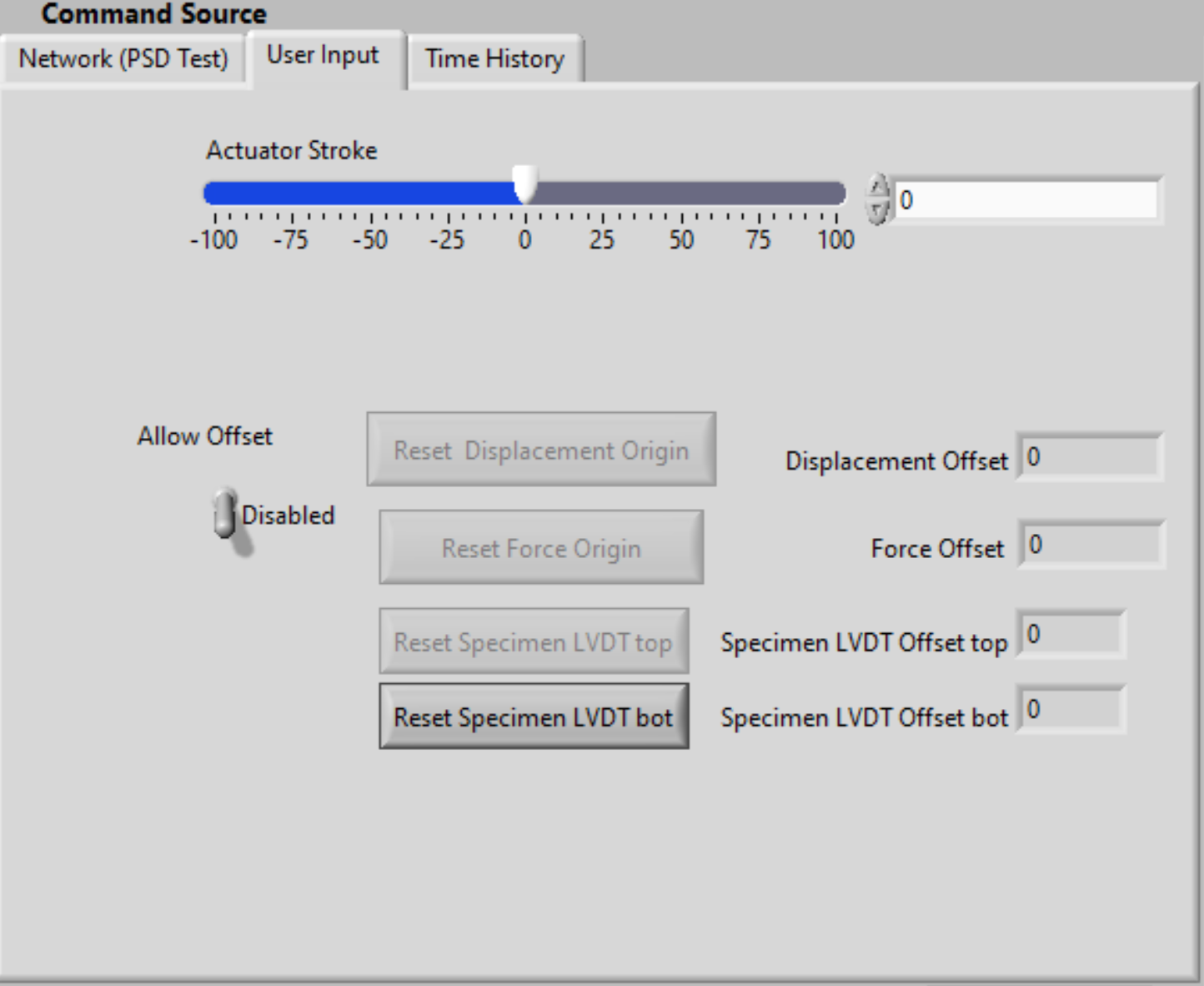 The time-history tab is used to apply a pre-defined command path to the specimen. It could represent a ground motion, a cyclic displacement, or a monotonic displacement command. The Time-History tab of the example NICON version is shown below. 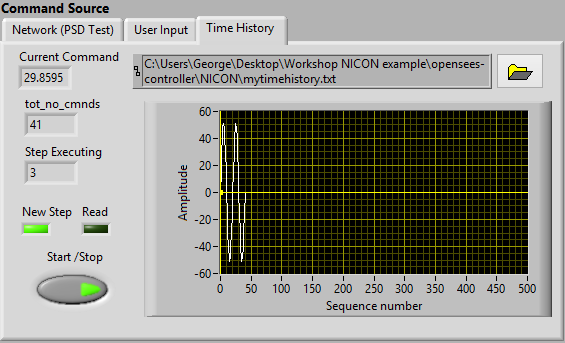 Information specified in this panel includes simulation parameters. Most of the values are pre-set in the NICON configuration file and are merely displayed in this panel.

The control tab of the NICON version is shown below. This tab displays information on displacement commands and some of the NICON control parameters. 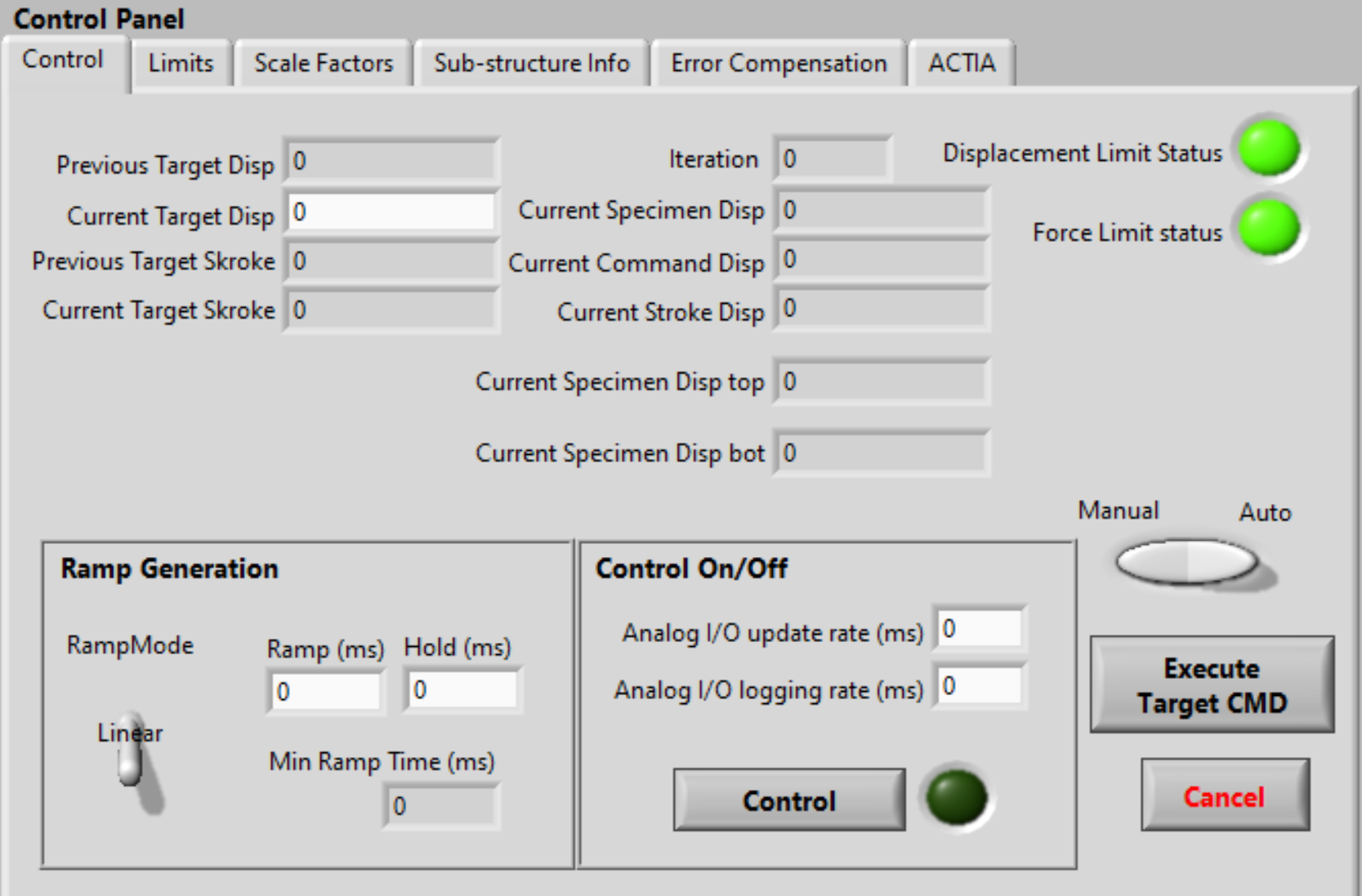 Iteration: This is the completed number of iterations for the current analysis step.

Current Specimen Disp: This is the actual specimen's displacement at the current iteration.

Current Command Disp: This is the displacement command at the current iteration.

Current stroke Disp: This is the measured actuator stroke at the current iteration.

Current Specimen Disp top: This is the actual displacement of one of the specimen's ends (e.g., Node j) at the current iteration (Optional).

Current Specimen Disp bot: This is the actual displacement of the other specimen's end (e.g., Node i) at the current iteration (Optional).

Ramp: This number shows the ramp time for each displacement increment.

Hold: This number shows the hold time after each ramp.

Analog I/O logging rate (ms): This number will specify the rate with which the communication between NICON and the controller will be recorded in the log file.

Force Limit Status: This light indicates whether the force limit is met. The upper and lower bounds of the displacement limit can be adjusted in the NICON configuration file, or the limits tab.

Rampmode: This button can be used to turn ramp mode on or off. The ramp mode is on by default.

Execute Target CMD: This button is used to send displacement commands to the actuator controller manually.

Cancel: This button can be used to terminate the execution of the current displacement command, under the manual mode.

The Limits tab for the provided NICON version is shown below. Force and displacement limits are shown and can be specified in this tab. The user can adjust the limits during the test as well. The limits specified here relate to the total actuator displacement stroke and force. In other words, the values before offset.

The figure below shows the screenshot of the Scale Factors Tab. The factors in this tab are set according to the controller’s specification. Scale factors and the I/O channel cannot be changed during the test. It is recommended that before every test, it is checked if the channels are connected correctly and proper scale factors are used. For the featured example, the output command is communicated using differential signaling, while the input force/displacement measurements are communicated using single-ended signaling. 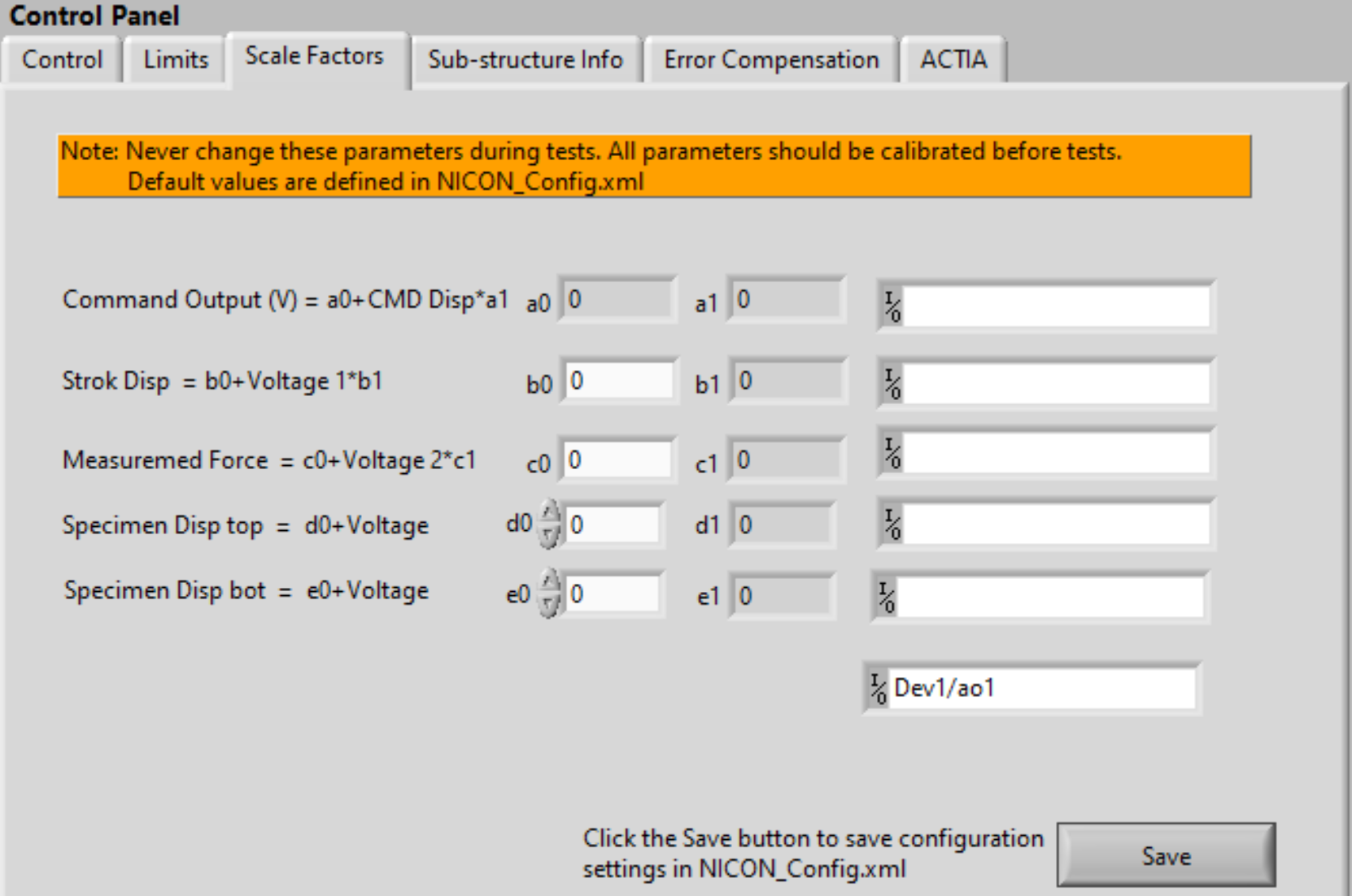 The figure below shows a screenshot of the Sub-structure Info Tab where users can configure the interface nodes and the effective DOFs for communication with the numerical model. Depending on the options (Option 1 to 4) for "activate dofs", up to two nodes of the interface element with two or three effective DOFs per node can be used. With the user-defined coordinates of the interface nodes (starts with node i and ends with node j), NICON-AIO performs the necessary coordinate transformation to obtain the quantities (displacement and force) along the axial direction of the specimen automatically. 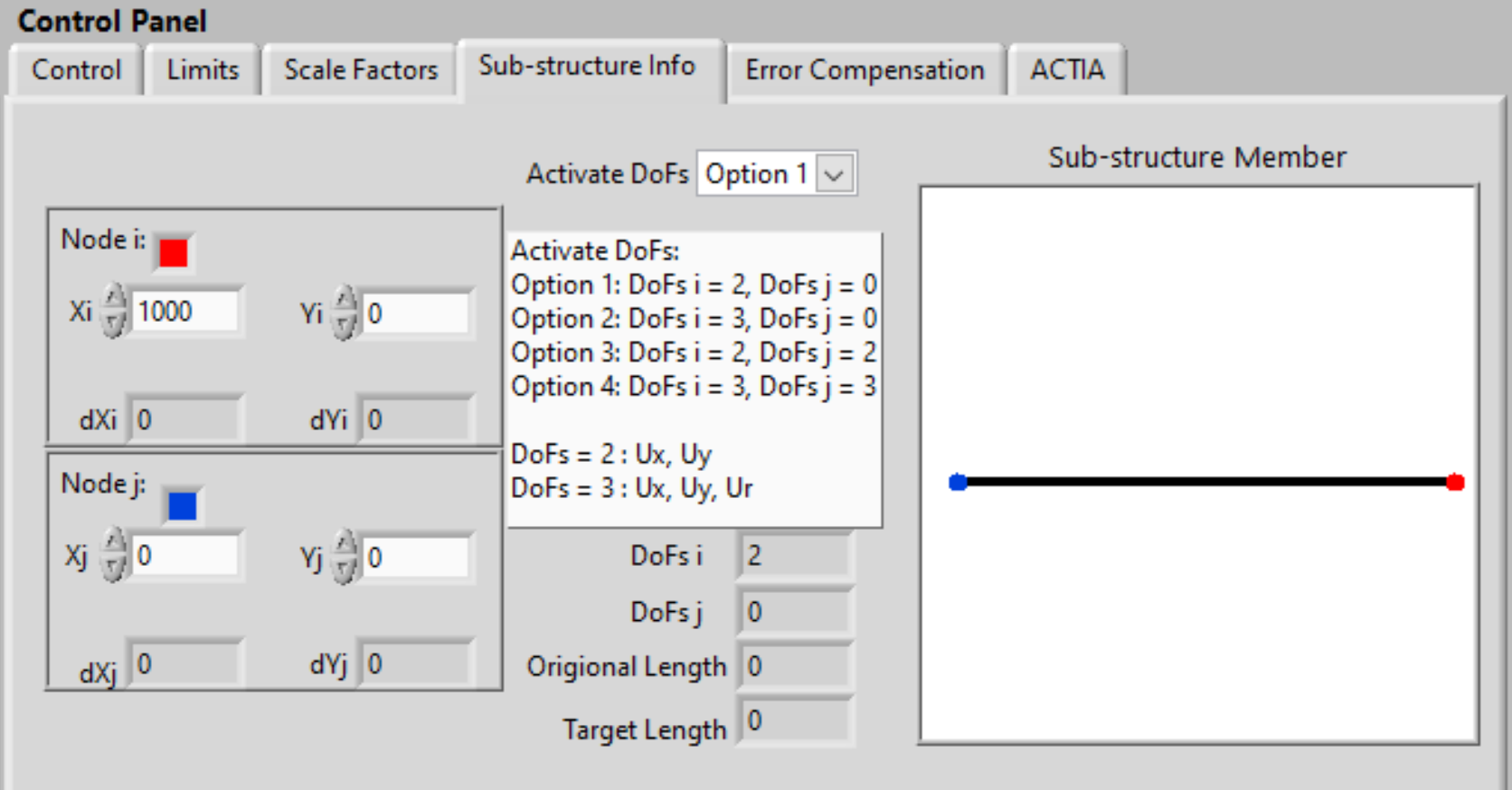 The figure below shows a screenshot of the Error Compensation Tab where users can define the gain value, the maximum number of iterations, and the error tolerance for the implemented error compensation function.

The figure below shows a screenshot of the ACTIA Tab. ACTIA is a Python script to automate the image acquisition during the hybrid simulation. NICON-AIO can send a triggering command to ACTIA through the TCP/IP network protocol to take photos for each simulation step. 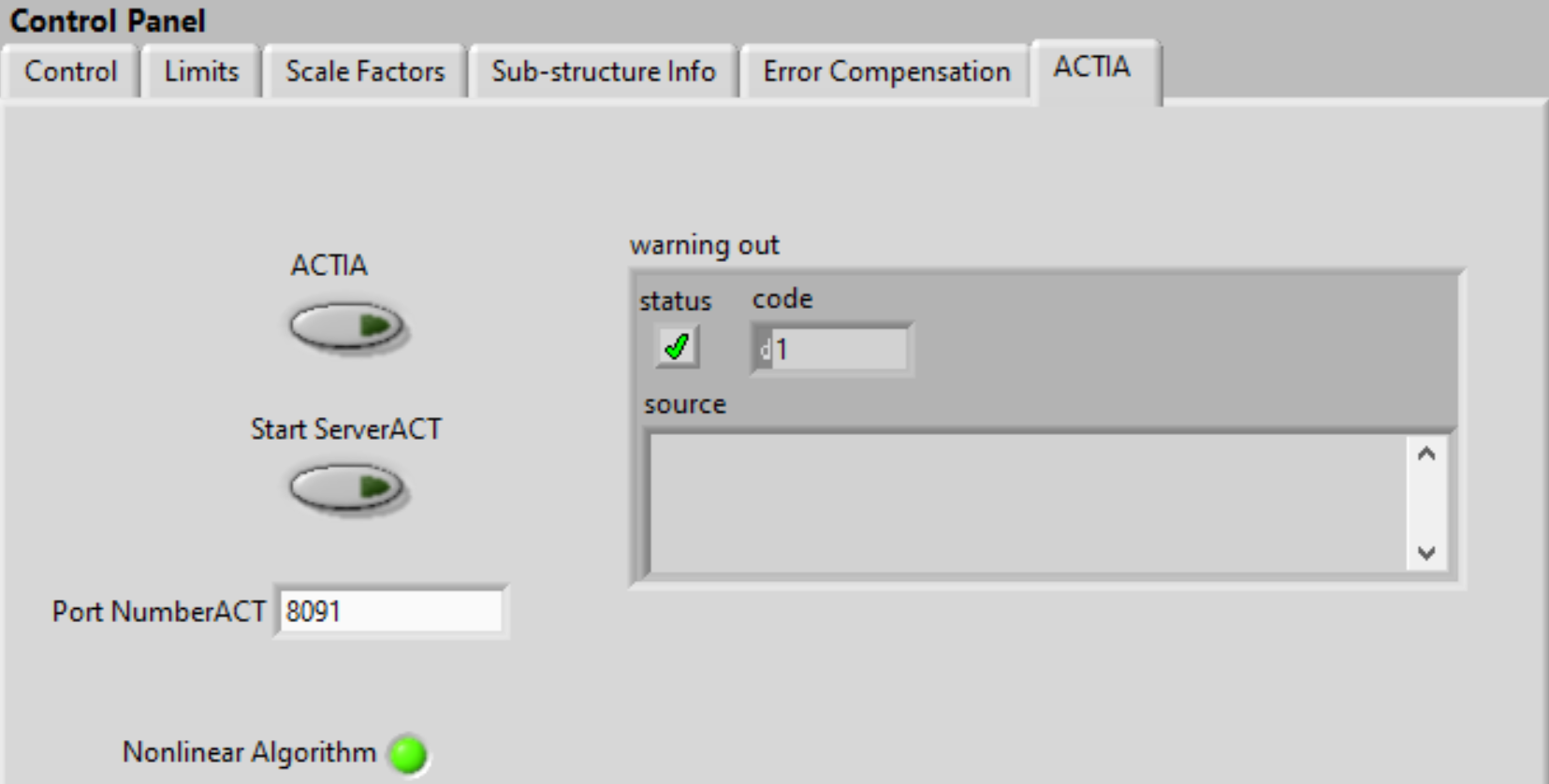 All received and output voltages as well as corresponding forces and displacements are displayed in this panel. The Monitoring Panel consists of three tabs, as described below.

The Time-History tab is shown below. Displacement (both command and measured) and measured force history are shown in this tab. Actual/Tared switch changes the display of displacement/force, from absolute measurement to the measured value from offset, and does not influence the commands.

To run a hybrid simulation of the example structure, the following steps should be used.