​​Graduate Student: Xuguang Wang
Supervisors: Oh-Sung Kwon
​Updates: Journal paper accepted on February 2, 2018. Hybrid tests completed in August 2017 (real-time continuous hybrid), and in November 2016 (ramp-hold hybrid)
Summary: Xuguang has recently developed a hybrid fire simulation method for civil structures in which a critical element subject to fire is experimentally tested while the remaining structural system is numerically analyzed simultaneously. The proposed method is different from previous approaches that it is fully validated with full-scale specimen subjected to high temperature and that it is automated displacement-controlled test with deformation error compensation. The two substructures (i.e. an experimental model and a numerical model) are integrated through network to enforce displacement compatibility and force equilibrium. Then, the developed simulation method is applied to a fire simulation of a steel moment resisting frame where one of the columns is assumed to be under temperature load following ISO834 fire curve. The development of the method and findings from the experiment was recently (February 2018) accepted for publication at the ASCE Journal of Structural Engineering. In 2017, Xuguang further developed method for continuous real-time hybrid fire simulation with rigorous mathematical analysis on stability issue that he observed in his earlier study. ​

​Seismic Analysis of Daikai Station Tunnel using UT-SIM FrameworK
​Graduate Students: Mohamed Sayed, University of Toronto; Quang, N. V, Hanyang University, Korea
Supervisors: Oh-Sung Kwon, University of Toronto; Duhee Park, Hanyang University, Korea
​Updates: Analyses completed in August 2017. A journal paper is being drafted.
​Summary: The multi-platform simulation of the well-known Daikai Station tunnel was carried out to replicate the collapse mechanism and failure of the center column of the tunnel during the 1995 Kobe earthquake. The actual tunnel collapsed due to the high lateral forces during the ground shaking, and also as a results of the insufficient shear reinforcement and ductility of the center column. The UT-SIM framework is considered for the multi-platform simulation by dividing the complex soil-tunnel model into two modules namely, the integration module (soil model), and the substructure module (tunnel lining model). The most reliable state-of-the-art software package, particularly OpenSees and Vector2 are investigated in modelling the integration and substructure modules, respectively. The multi-platform simulation through UT-SIM framework allowed us to adequately replicate the collapse of the tunnel, as the center column started to develop wide diagonal shear cracks that indicated the insufficient shear reinforcement of the center column. Finally, due to large deformation and shear cracking of the center column, the upper slab developed large flexure cracking then failure.

Summary: In order to achieve a realistic seismic response assessment for braced frames, Saeid performed pseudo-dynamic hybrid (experimental-numerical) simulations on steel braced frames with braces tested physically. For this purpose and as part of his research project, Saeid developed a unique experimental apparatus that has been named the University of Toronto’s 10-Element (UT10) Hybrid Simulator which enables hybrid simulations of up to 10 large-scale uniaxial steel braces simultaneously, making it one of the largest number of physical elements ever used in hybrid simulation applications in Civil Engineering. UT10 Hybrid Simulator is built on the Shell Element Tester (SET) facility at the University of Toronto. It uses sixty, 500-1000 kN servo-controlled hydraulic actuators to support and load the brace specimens. MTS FlexTest 200 controllers with over 60 control channels and an AeroPro software are used to control these actuators. Control of this number of actuators and using them for hybrid simulation was a significant challenge for which Saeid had to make modifications in the controllers, program the software interface, and develop a National Instrument LabVIEW based network interface for the hybrid simulations. Thus far, Saeid has successfully used UT10 Hybrid Simulator to perform 1-, 3-, and 4-element hybrid simulations on a 5-storey building equipped with Buckling Restrained Braced Frames (BRBF) and Special Concentric Braced Frames (SCBF). The outcomes of his experimental programs can be used for critical review and potential improvements of the currently used modelling techniques and performance based design guidelines for multi-storey high performance braced frames.
​
The following time-lapse video shows the behaviour of a five-storey building where four braces in the first two stories were tested in the UT-10 Hybrid Simulator.
​Seismic Performance Assessment of Three-Storey RC Structure
​
Graduate Students: Georgios Giotis
Supervisors: Oh-Sung Kwon, Shamim Sheikh
Updates: 2017. George completed hybrid simulations of a three-storey ORCF with intact, repaired, and retrofitted concrete columns.

Summary: George has completed his MASc project with two major contributions; development of weakly-coupled hybrid simulation method and application of the method for seismic performance assessment of a reinforced concrete structure. The followings are abstracts of companion papers that will be submitted for peer review shortly.

Part A: Hybrid simulation methods have attracted significant interest from researchers in structural engineering as a means for accurate seismic performance assessment of structures. The implementation of hybrid simulation in a testing facility requires appropriate control of the boundary conditions of physically tested specimens. For a hybrid simulation performed with a two-dimensional numerical model, where a frame is subjected to planar motions, at least three DOFs need to be simultaneously controlled, which would require three hydraulic actuators at each interface node and a complex control scheme. Consequently, for large-scale tests where an assessment of complex substructures is performed, a significant number of actuators is required, which is not possible in most of the structural testing facilities. In this study a novel method is proposed which allows for testing facilities with insufficient number of actuators to run hybrid simulations. The method is based on coupling of a surrogate numerical model with a physical specimen such that the numerical model can supplement the response of a DOF that cannot be obtained from the physical specimen. This paper presents the analytical study and the theoretical background of the proposed methodology. Additionally, a parametric study is conducted for defining the method’s applicability to various frame elements whose structural characteristics represent those of a shear wall to a fixed column. The proposed methodology of this paper is experimentally implemented in a companion paper of this series (Part B). This article concludes with the applicability figures of the proposed simulation method and the summary of the parameters that influence the applicability of the simulation method.

Part B: Laboratory testing is the most reliable method to evaluate the performance of structural elements or structural systems. Testing of structural elements, however, requires significant resources and appropriately equipped testing facilities. The hybrid simulation method has been developed as a tool to integrate numerical models with physical specimens to reduce the required resources for the experimental testing while maintaining the level of accuracy. It is evident, however, that even when hybrid simulation is employed, considerable testing equipment is required especially when multiple degrees of freedom need to be controlled. As discussed in Part A of this study, it is essential to accurately control each DOF at the interface between a physical specimen and a numerical model. The control of each DOF requires at least one hydraulic actuator. The objective of this study is to experimentally validate the weakly-coupled hybrid simulation (WCHS) method proposed in Part A which was developed to allow for the application of hybrid simulation in experimental facilities without a sufficient number of actuators for running hybrid simulation. As an application of the method, the seismic performance of an RC structure is experimentally evaluated using the WCHS method. Before the experimental application, the applicability of the WCHS is numerically investigated for the current case study and potential inaccuracies are identified. Application of the proposed simulation method in this study has validated that the WCHS offers a workable solution for applying hybrid simulation when equipment limitation exists. This study can be employed as guideline for applying the proposed WCHS in structural testing of elements other than RC columns as well 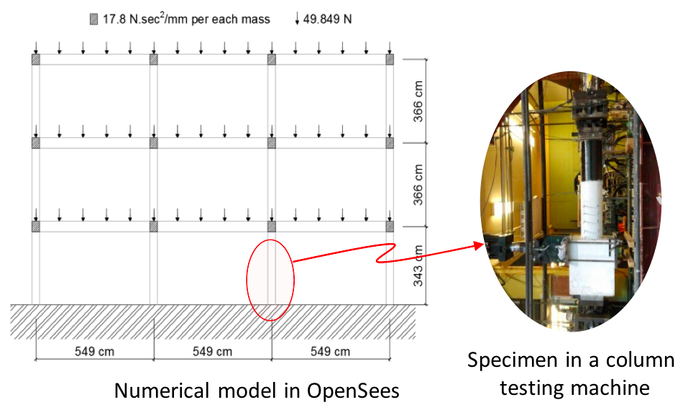