Due to the challenges in numerical simulation of wind-structure interaction, the dynamic response of long-span bridges or high-rise buildings subjected to wind loads has been primarily evaluated through wind tunnel tests. In the aeroelastic wind tunnel test of a bridge deck or a building, the wind force and the interaction between wind and the structure is very difficult to model computationally. Yet, the stiffness, mass, or damping properties can be easily modelled in a computer because they remain nearly constant throughout a wind tunnel test. Therefore, the hybrid simulation method is being employed in the aeroelastic wind tunnel tests of a scaled section model of a bridge deck and a high-rise building such that the wind force can be measured in the wind tunnel whereas the dynamic properties are numerically modelled. The measured wind force and numerical structural response are simultaneously interacted through the interfaces of a load cell and (an) actuator(s).

As a first step of the development of hybrid wind-tunnel testing, the experimental apparatus for a bridge deck and a high-rise building have been designed and the control strategy has been planned. The first hybrid wind simulation will be carried out in 2019.

Target structure of the test was one of the link beam in 8-story RC dual frame-wall building. The target link beam was physically tested in the lab and the other members of the building were numerically considered by FEA software, S-Frame and VecTor2, thereby the axial restraint on the target link beam was evaluated for each step of the hybrid simulation. The evaluated axial restraint was imposed on the test specimen by using two hydraulic actuators installed along the axial direction of the test specimen. The two actuators were simultaneously controlled using NICON 10 so that the test beam specimen can behave under a realistic degree of axial restraint. Test results clearly showed that the behavior of the link beam under the axial restraint has larger stiffness and shear capacity compared with the link beam tested by the conventional test procedure. 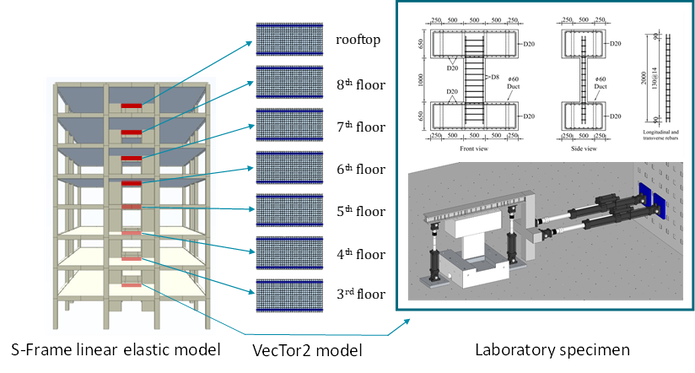 In order to evaluate the seismic performance of the moment resisting frame, the beam-column connection specimens were typically tested under the lateral loading condition. For the interior beam-column connection, it will be more correct if all degree of freedoms (3 DoFs at each node, total 12 DoFs) could be controlled, but practically it is very difficult to be realized because it needs many actuators and complicated test setup. The moment-rotation relationship around the joint can represent the behavior of the beam-column connection, and the moment-rotation relationship can be modeled using the lumped spring at the joint. The other parts will be modeled using elastic beam-column element in the integration module. During the hybrid simulation, we receive the target rotation from the main model and the loading is applied until the measured rotation gets to the target rotation, after loading, the moment is sent to the main model.

The current practice for the analysis of complex structures is to conduct equivalent linear analysis to evaluate seismic demand, followed by detailed nonlinear analysis of specific structural elements in order to define seismic capacity. The procedure generally is followed due to extensive computing time, as well as limitations of individual structural analysis software. However, by decoupling the critical structural elements from rest of the structure, interaction between the local and system level behavior is ignored.

An integrated approach is taken for the analysis of the APR-1400 nuclear power plant. The system level behavior is modelled using ABAQUS, and the localized behavior is modelled using VecTor4, the two separate models are then integrated into one model through UT-SIM’s communication protocols. ABAQUS provides easy to user interfaces and efficient solution scheme. However, its capacities to model the nonlinear behavior of reinforced concrete is tedious, and requires careful calibration. VecTor4 on the other hand, as been proven to accurately model the behavior of reinforced concrete, however, the pre- and post- processing tools provided are complicated to use, limiting its ability to modelling complex structures. By taking advantage of UT-SIM’s ability to seamlessly integrate various numerical models together, a single hybrid model of the entire structure is created using both ABAQUS and VecTor4.

A novel approach is introduced for multi-scale seismic analysis of a city block capable of capturing the site-city interaction (SCI) effect, which is usually disregarded in practice for buildings in dense urban areas. A pilot study of a small city block was conducted to demonstrate the potential of the proposed framework in capturing the SCI effect on a target building (43-storey). A city block in downtown Toronto is decomposed into three substructures: (1) the building of interest, which is modeled in detail (micro-level) as a secondary substructure (Substructure 1), (2) the adjacent buildings and soil domain, which are generated through the SCI framework (macro-level) and are defined as another secondary substructure (Substructure 2), (3) the interface elements between Substructure 1 and 2, which are modeled as the primary substructure. The primary substructure is modeled in the Coordinator program while the two secondary substructures are modeled with OpenSees. The dynamic integration of substructures is achieved through UT-SIM framework. The dynamic response of the target building is investigated for two analysis cases: (1) SSI case with no surrounding buildings, (2) SCI case represents the condition where all buildings are considered in analysis. The analysis case with SCI shows 2% less base shear force compared to the case when the two-neighboring buildings are ignored in analysis.

The most reliable way to numerically consider the influence of SSI on seismic performance of nuclear structures requires a detailed modelling of both superstructures and the soil-foundation system. Nevertheless, only a few attempts of this kind have been made. It is not only because the method requires huge modelling and computing efforts but also due to the limitations of a single modelling package in an accurate representation of both the superstructure and the soil domain. The integrated simulation method, especially the system-level decomposition method, proposed in this study is best suited for this type of simulations as (a) it allows analysis tools, either specialized for superstructures or the soil-foundation systems, to be integrated; (b) the decomposition of the system into subsystems allows a redistribution of the workload such that a high-performance desktop computer or a supercomputer can be employed.
The integrated method is being used for a nuclear containment structure to fully capture realistic nonlinear behaviours of both the structure the soil domain. Specifically, a detailed 3D model of the containment structure will be developed with VecTor4 while the soil-foundation system will be modelled with OpenSees/ABAQUS.

Previous studies have indicated that building structures with hysteretic or friction dampers with low-post yield stiffness may be susceptible to soft-storey formation, at very large drifts. The additional lateral demand that is imposed on the system by secondary P-Delta effects could further reduce the post-yield stiffness and lead to damage accumulation on the first floor as the structure is deformed into the nonlinear range, under MCE-Level shakings. The Yielding Brace System (YBS), also known as the Scorpion Yielding Connector (SYC), was developed at the University of Toronto (Gray et al) as an alternative hysteretic damper, which prevents soft-storey formation at large drifts.
In this project, a set of four-element hybrid simulations will be carried out on a four storey steel structure, designed with YBS braces. The response of the YBS braces will be captured physically, while the rest of the structure is modelled numerically in OpenSees. These experiments will mark the first full-scale hybrid simulations using the University of Toronto 10-element Hybrid Simulation Platform and the first hybrid tests on the YBS system. The preliminary numerical studies indicate promising performance of the structure, due to the signature increased post-yield stiffness of the YBS system.

A large experimental program is currently on-going at the University of Toronto, in collaboration with Cast ConneX corporation on experimental validation and performance assessment of Replaceable Cast-Steel Links for use in Eccentrically Braced Frames (EBFs). The project aims to develop an off-the-shelf product that when used in EBFs, will dramatically improve the seismic performance of such systems. After the experimental validations of the system, a set of hybrid simulations will be carried out on a mid-rise steel structure, with Cast-Steel Links.