Seismic fragility assessment requires a large number of data points and reliable numerical models which can predict the responses of structures under a wide range of excitation intensities. Nonlinear time history analysis methods have been traditionally used to develop seismic fragility curves in which the reliability of the fragility curves largely depends on the accuracy of the numerical models. In this project, the seismic fragility of Self-Centering Energy Dissipative (SCED) Bracing Systems is assessed through hybrid simulations using UI-SimCor. The SCED Bracing System which has been actively developed by Prof. Christopoulos' group can sustain large inter-story drifts, has the ability to dissipate energy, and does not develop any permanent deformations or damage under multiple seismic excitations. Since numerical models have inherent limitations due to simplification of complicated force-deformation relationships, over thirty hybrid simulations of a six-storey steel structure were carried out to experimentally derive seismic fragility curves. The SCED Brace in the first floor of the structure was experimentally tested in full scale while the rest of the building was numerically represented. The simulation results showed that the SCED Brace system could resist MCE level ground motions without developing noticeable damage while meeting drift requirements. The experiments also demonstrated that the hybrid simulation is a reliable experimental method for seismic fragility assessment of structures.

Due to their low cost, ease of design and implementation, Tuned Liquid Dampers (TLDs) are used in suppressing structural vibrations under dynamic loads. A TLD is typically a rectangular tank filled with liquid (i.e., water) and placed on the roof level of structures. The ability to accurately predict the dynamic properties of TLDs is a key task in their optimal design. However, as a result of highly nonlinear TLD behaviour (such as wave-breaking), it is difficult to establish accurate numerical models for a wide range of operations. To investigate the dynamic TLD-structure interaction, through RTHS a TLD, was tested physically and the rest of the structure was modelled in the computer.

RTHS of Structures Equipped with Elastomeric Dampers with Friction Fuses

RTHS of Structures Equipped with Multi-cell and Annular TLDs

In traditional design of tuned liquid dampers, the TLD is configured such that its sloshing frequency is tuned to an optimal value near the natural frequency of the structure. This maximizes the damper’s efficiency in mitigating the structural vibrations due to the first mode of vibration. However, in the event that higher modes of structure are resonated (e.g. seismic input), the single TLD configuration may cease to be effective. Installing multiple tuned liquid dampers (MTLDs) each tuned to one of the vibrational modes can be an attractive alternative to improve and complement the efficiency of the main TLD which is still tuned to the natural frequency of the structure. To investigate this, the computational/control platform was employed to conduct RTHS experiments of MTLD-multi story structures. For this purpose, a large size shake table was designed and built that represents the roof of the test structure. Due to the flexibility that RTHS method offers several structural systems with different configurations and floor numbers were studied experimentally.

As a separate study, the dynamic interaction between a wind turbine tower and an Annular TLD was investigated using RTHS, where the Annular TLD was the experimental substructure. 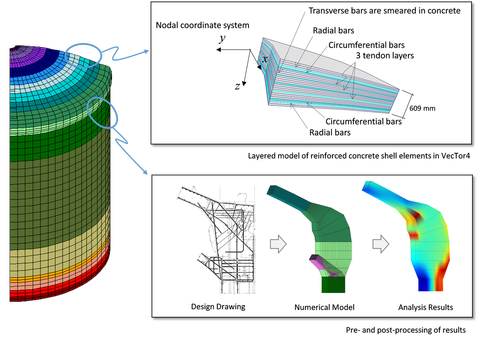 With the support of Candu Owner’s Group (COG) through Candu Energy, Inc., the structural performance of a CANDU containment structure is being evaluated considering various time-dependent parameters and beyond-design level loads. In the first year (2013-2014) of the project, a typical CANDU containment structure was modelled using VecTor4, and the effects of time-dependent parameters, such as shrinkage, creep, and relaxation, were considered. The internal pressure is increased until the containment structure developed a mechanism. In the second and third years (2014-2016), laboratory tests are currently being carried out to refine the shrinkage and creep models of concrete when the concrete is subjected to a low-humidity environment similar to the internal environment of a typical CANDU containment structure. In addition, a complete nonlinear numerical model of a nuclear power plant containment structure is analyzed with beyond-design level loads and subsequent increases of internal pressure as observed in the 2011 Tohoku Earthquake. Research is in-progress to include dynamic impedance of soil-foundation system to the nonlinear time-domain analysis.

Development of Indicators to Assess the Accuracy of RTHS

To have RTHS as a reliable tool, the accuracy of the results needs to be assessed by carefully monitoring, and if possible, quantifying the errors involved. To address this issue several different accuracy indicators have been developed. These can uncouple and quantify the amplitude and phase errors.

Development of Integration Algorithms for RTHS

When a sharp discontinuity exists in the loading history as in the case of pulse loading, the discretized version of the load will have an extra distortion which manifests itself as an amplitude distortion in the numerical solution. This may render the RTHS results inaccurate. A limit approach that modified the integration algorithms in their final form to account for the load discontinuity was introduced.

A new explicit numerical integration method for RTHS based on discrete state space formulation was developed. This new integration algorithm is numerically efficient, has controllable numerical damping and can be easily introduced to different platforms. It has been experimentally validated in NI-PXI and dSPACE platforms. [Liu et al. 2016]

The accuracy of RTHS results depends highly on the accurate control of the hydraulic actuators in imposing the command displacements to the experimental substructure. Although RTHS is primarily employed when the experimental substructure exhibits complex nonlinear hysteretic behaviour, the servo-hydraulic control design for RTHS in the literature primarily involves heuristic tuning or only considers the initial elastic stiffness of the test structure.

A new nonlinear controller that utilizes state feedback linearization through a transformation of the state variables was developed. As such, this controller can explicitly account for the nonlinearities associated with the servo-hydraulic system. By using a Ramberg-Osgood formulation in the controller design, the proposed controller explicitly accounts also for the stiffness change experienced by the test structure as it deforms beyond the elastic range. [Moosavi et al. 2015]

A new adaptive controller for servo-hydraulic actuators was developed. This new controller does not require the adaptive parameters to be initiated by the user; it sets them through online system identification using the frequency domain based indicators. Since the user reconfigurable NI-PXI computational/control platform is completely transparent, it was possible to implement this adaptive controller, and verify its tracking capability experimentally.  [Hessabi et al. 2014]

Pseudo-dynamic hybrid simulation is a novel testing method that aims to provide a more realistic prediction of the seismic response of a structural system by integrating the experimental response of structural components with numerical models of the rest of the structural system. Application of this test method to practical research projects, however, is still limited due to the complexity of the test method. In addition, only a few structural components in a structural system can currently be tested experimentally in large-scale, and therefore the contribution of the experimental results on the accuracy of the overall seismic response diminishes. In order to overcome these limitations, a unique hybrid simulation testing apparatus was developed at the University of Toronto which is capable of performing hybrid simulations on up to 10 large-scale bracing or damping elements simultaneously. The image shown in the figure is a numerical model of a five-storey building with buckling-restrained braces (BRB). The BRB of the first-floor is modelled with a physical specimen. In this test, only one physical specimen was used to validate the overall hybrid simulation framework. Three, five, and ten-specimen hybrid simulations will be carried out in 2016 and 2017. ​

Integrated Simulation of a Reinforced Concrete Frame with Shear-Critical Elements 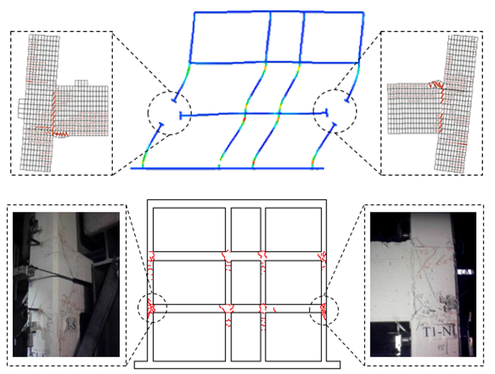 The substructuring concept has been used in different forms such as in hybrid simulation and parallel computing methods, all contributing significantly to experimental testing and numerical analysis research programs. In this study, unlike previous studies, the main goal is to use the substructuring technique to develop a framework which expands the capabilities of current nonlinear programs, enabling detailed analysis of mixed-type reinforced concrete (RC) systems in an integrated fashion, to a degree of accuracy unattained before. To achieve this goal, the primary objective of the proposed framework is to combine different VecTor programs which are among the most advanced nonlinear analysis tools for RC structures, while fully considering the interaction between substructures. This can greatly extend the application of conventional standalone nonlinear analysis. For instance, integrating VecTor2 (membrane software) and VecTor5 (frame software) provides a unique and effective solution technique for detailed analysis of disturbed regions in RC frames which is not available in any other stand-alone frame type analysis program. The flexible and object-oriented architecture of the framework facilitates inclusion of new analysis software.

Simulation of a Steel Structure in Fire

﻿One of the important design criteria for tunnels is the development of cracks in the tunnel. To properly assess the deformation (or force) demand to a tunnel, it is necessary to consider realistic soil properties as well as the crack mechanism of reinforced concrete tunnels. However, there are not many software that can capture realistic behaviour of both soil domain and reinforced concrete structures. In practice, equivalent static procedure with simplified soil spring is most commonly used to consider interaction of soil domain and a reinforced concrete tunnel. To address the challenge, the research team in University of Toronto is using the UT-SIM framework to integrate realistic soil material model in OpenSees and the state-of-art reinforced concrete structure analysis tool, VecTor2. The image below shows an example analysis result of soil-tunnel interaction analysis. Research is in progress to evaluate the influence of diverse soil materials (e.g. cohesionless soil, cohesive soil), relative stiffness of soil and tunnel, and liquefaction of soil on the performance of tunnels. The research will lead to a larger scale simulation of urban system where the interaction between soil, tunnel, and nearby structures are fully modelled.